Its not the first time for us being at the Gamesarena in Poznan. To understand what is the Gamesarena, you can imagine Gamescom, but a bit smaller. And as well a bit more open to indie developer. And this is the charme of the Polish games scene. The quality of games they deliver is very high, but still it is a young industry. And also endusers like the games from indies. Therefore its a perfect place to show game concepts to the audience and receive feedback. Therefore many German indie studios have been again in Poznan. To mention just a few, I met the guys from Happy-Tuesday, Rat King Entertainment and megagon industries.

As well there is the conference area and it becomes more and more international. 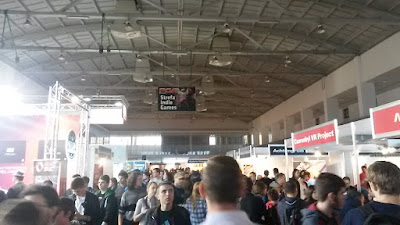 For us from Tailorstage it was an interesting conference, as we believe we have closed a deal now, related to indie developers. I hope we can write more details soon.

And of course we met many people of the Berlin games scene. We realised to have a get together we go to Poland, but indeed we all travel to Poland now for more than two years and we always like the openness of the Polish people and game developers.

A special thanks to André the indieadvisor with his full support of our flatrate services. As well I would like to mention Michael Liebe, as his new gaming concept to play in cinemas sounds amazing, http://game-cinema.de/.

More and more information are popping up that the strong usage of smartphones and tablets by children can seriously harm their health. Thats why we develop the product KAANGOO.club. Because we believe the usage of such devices is positive, but it has to be limited and controlled. Of course not over controlled.

With our product we want to help to solve this problem. We believe children should play games and use the internet. With our KAANGOO-product we can turn Smartphones and tablets into Kids safe playgrounds.

More information about the study you can find on the website of a popular South German radio station, SWR3. I was lucky being in the area because of our raod show to media partners to present interesting gaming products.